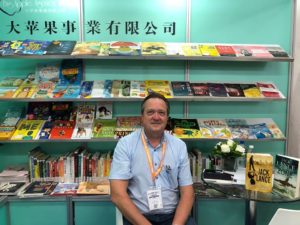 Jack went to Beijing, China, last week, at the invite of his wonderful Chinese literary agency Big Apple.
He met no less than fifteen interested publishers at the Beijing Book Fair and it looks like new publishing deals in the Far East may happen! Of course he took the opportunity to see some of the Great Wall and the Forbidden City, after the Fair. Jack said: “If there is such a thing as a good omen for publishing deals, then I’ll take the free upgrade to business class I got on my way home as such. Oh, and by the way, I am writing new novels. Hope to present two new titles in 2019.”