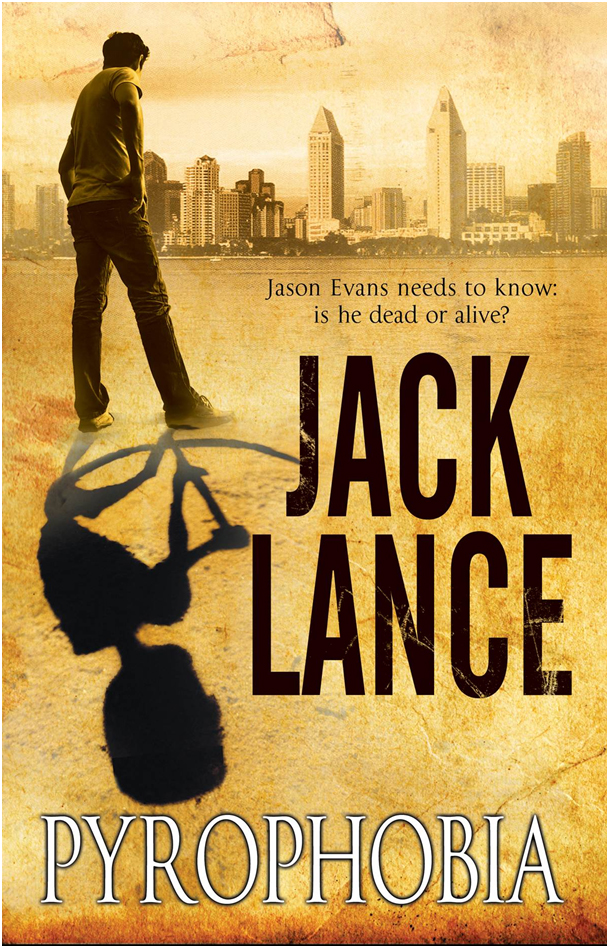 Jason Evans, whose life has always been smooth sailing, has to find his own grave, after someone sends him anonymous letters, containing photographs of a cemetery and ominous written messages: “You think you’re alive, but you are dead.”
It turns out his life is nothing what it appeared to be.
He has a mortal enemy.
Only if he does discover his final resting place, he may have a chance to survive.

Life has been nothing but smooth sailing for Jason Evans. He has a loving wife, a good job, and plenty of friends. There’s nothing standing in the way of his happiness, until an unknown enemy sends him a strange photograph – of a cemetery – with a perplexing message on the back: ‘You are dead.’

Jason believes it to be a prank, but then he receives a second photograph. This time the message is: ‘You think you’re alive, but you don’t exist…’
Jason begins to feel threatened and embarks on a quest to find the cemetery depicted in the photographs, searching for what might be his own grave. He soon finds out that his life is not what he has always believed it to be. Then he receives the third photograph: ‘August 18th, your date of death.’

Jason Evans was worried. Usually he had scant cause for concern or complaint. But on the day the trouble began, something nagged at him. On that Monday, July 13th, he was making slow progress on a promotion campaign he needed to complete. Was it his client, or was he just having a bad day? Probably both.

He had to come up with something original for Tommy Jones’ car dealership—or more specifically, for the used car emporium of the “Automobile King,” a label repugnant to Jason. Tommy Jones had proclaimed himself the king of automobiles and was damn proud of the crown he had placed on his head. “Genius, ain’t it”, Jones this morning had crowed to Jason and his colleagues. “I should go into advertising myself!” What new ideas could Jason possibly present to a man for whom, during the past thirty years, every advertising concept imaginable had been cooked up and warmed over, and whose product he detested?
Jason’s mind wandered back to the days when, as a naive eighteen-year-old, he had bought one of Tommy’s second-hand rust buckets. The aging red Plymouth Road Runner had given up the ghost after only two months. That had been the first and last time he had purchased a car from the automobile king. And now this auto entrepreneur was his customer, a client with Tanner & Preston, the prestigious Los Angeles advertising agency where Jason worked as an art director.
Of all people, the agency’s CEO Brian Anderson had selected Jason to head the team assigned to seal the deal with their newest client who had jumped ship from Foote, Grey & Hardy, a hard-nose competitor of Tanner & Preston.
Jason brushed strands of unruly black hair from his eyes and stared up at the ceiling, searching in vain for inspiration. But more reveries haunted him instead.
Since forever, or so it seemed, Tommy Jones’s dazzling toothpaste-ad-smile had beamed down at him from posters and billboards scattered around town. Today was the first time he had looked the man in the eye and shaken his hand. Tommy, at age sixty-two, had looked a lot different from his public persona. He appeared older, balder and grayer in real life, without Photoshop’s false promise of eternal youth. Only his famous grin and plump face—and his indomitable energy—remained the same. He was a short, sturdy little man who stood chin-high to Jason.
“I want something new, something exciting,” Jones had grandly exclaimed during the morning meeting, when he had graced everyone at Tanner & Preston with his presence. “Make my cars stand out from the competition. Make them more attractive, better looking. Christ, Brian, make them sexy.”
Fuck you, Jason had though as he sat there, listening, the memory of the run-down piece of crap the automobile king had sold him assaulting his mind.
Of course, he hadn’t said anything derogatory out loud. Tommy Jones carried around a fat wallet and besides, times had changed for Jason. He was far better off financially these days, and the silver metallic Buick LaCrosse CX he was currently driving could not be found on any of Tommy Jones’s sales lots. It was too expensive and had too much class, even as a used car.
But since he had assembled his “Tommy Jones Team,” Jason hadn’t sketched as much as an outline for a campaign aimed at making the automobile king’s emporium appear sexy—or even viable. His loyal and dependable copywriter, Anthony Wilson, hadn’t come up with much usable copy either.
Jason’s gaze wandered around and he took note of the desk clock in the shape of two hearts, a birthday gift from his wife Kayla. It was after six o’clock. The other members of the team—Carol, Donald, and Anthony—had gone home for the night. He was the last one still at work, and thus had the twenty-fourth floor of the Roosevelt Tower to himself. He stared out the window into the heat and haze of a Los Angeles summer evening. Just four more weeks, he thought, as if with a prayer. Just four more weeks and he and Kayla could finally leave the smog and chaos of this city behind them and immerse themselves in the glorious majesty and intimacy of the Rocky Mountains.
But first he had Tommy Jones to deal with. He sighed with frustration, knowing he wasn’t going to pull off a miracle tonight. He stood up and was about to leave his office when George, Tanner & Preston’s mail delivery man, entered waving a manila envelope in the air.
“Late delivery,” George said, as he handed Jason the envelope. Without another word, he wheeled around and walked out of the office.
Jason stared at George’s broad back as he strode down the long hallway. When he saw the delivery man disappear around a corner, he glanced down at the envelope bearing his name and company’s address written in a bold angular script, but with no sender’s logo or return address indicated. Frowning, he fished his silver letter opener from the pen stand on his desk and slid open the envelope. Inside he found a Polaroid photograph of a tall, rusty iron gate set between two wide-trunked oak trees. Behind the gate stood rows of gravestones jutting crookedly out of the earth. At first blush it appeared similar to an old graveyard he had once visited in downtown Boston. But on closer inspection this graveyard seemed more unkempt than the one on Tremont Street.
Jason peered into the envelope but saw nothing else inside. His first thought was that Shaun Reilly had sent the photo. It would not have been the first time that Shaun had neglected to add a note. When Jason turned the photograph over, he noticed words on the back written by the same hand.

On amazon
-This is a great book which explores the terrible phobia that fire can produce. Jack Lance has created wonderful characters which drive the plot along at a tremendous pace. He has also beautifully set out the problems a marriage can encounter when, despite undoubted mutual love, one partner suffers from a debilitating and isolating fear.The eventual denouement is as surprising as it is likely, and is a fitting climax to a wonderful thriller.

-The psychological fundaments are well explained. The suspense never lets go and builds up steadily, until the grande finale. Just as one riddle is solved, another one pops up. The books is filled with surprises and twists, and every scene is at its place.

-You just have to know what happened at August 18 and who’s behind all of it.

-Jasons horrors are described so vividly, that I time and again literally held my breath while reading. The last 70 pages were truly perfect. The ending was fitting and left me with a good feeling and my conclusion, that I’d read a perfect psycho-thriller.

La Bibliotheque de Jake
The intrige is brilliant and the short chapters push you forward and forward. You don’t know how the story ends until you’ve read the very last page.

Les lectures d’Alexia
I just loved this psychological thriller. In this book there’s none of the gore I usually like, it’s a soft and smooth tale and the ending was a big surprise: I never saw it coming.

Histoire du Soir
This is really a great thriller and I thank the publisher for this surprising discovery. Is Jack Lance the new king of suspense? Let’s investigate!  First off: his debut novel has been a great succes in France. The book has created a big buzz in the online literary blogsphere. But what about the story itself? Well, the story starts out not so revolutionary at all. Jason Evans is leading an ordinary life… until he receives some very disturbing polaroid photograps. ‘You think you’re alive, but you’re dead,’ is written on them. After that, the reader is hooked and is it impossible to put the book down. The read is compelling from start to finish, and a supernatural touch is splendidly interwoven, which only enhances the impact of Jason’s phobia, his nightmares, and of course the mysterious messages on the polaroids.

Czech reader
The comparison with Stephen King is justified. A fast and very good read.

Librosyliteratura.es
An effective novel since it gets to the point and avoids superfluous descriptions.

Polish reader
The author is honest, as the reader you know that you can trust him; you feel the author is a good friend who doesn’t cheat. This is one of my favorite novels.

Russian reader
I’m proud I have this book in my library at home.

Dutch readers
-The author creates a mysterious atmosphere, that affects the reader. Is Jason alive or is he dead? Is he who he always thought he was? The book addresses these questions at an almost existential level. Jack Lance is often compared to Stephen King, and rightly so when it comes to creating suspense and blending normal everyday settings and situations with the supernatural, but also in the denouement. The explanation for who and what’s behind the threats that Jason receives is cleverly thought up and very grippingly described. Pyrophobia is thriller that warms you until the early hours of dawn.

-Jason Evans is confronted with his own death and goes on a quest to unravel this mystery. Although the outset sounds a little strange, Jack Lance has managed to turn his idea into a very convincing and believable story. The story’s inner logic stand like a brick wall. The result is a fast and easy to read book, with plenty of exciting twists. Also, Pyrophobia is the book to read if you’re interested in a good thriller with exciting and well researched paranormal content.

-Thanks for the pleasure of reading you give me, and others. At school, I had ro read literary works. Those literary works spoiled my appetite for reading, until – some 10 years ago – I discovered Roald Dahl. After that I started reading with pleasure again, although I never found books again that could enthrall me in the same way as Roald Dahl. Then, Jack Lance, I read your books. I found in your books a style of writing as least as compelling as the works of my hero Roald Dahl.

-A Dutch page turner of grand magnitude. This book is certainly no less than the works of authors like Stephen King, James Herbert or John Saul. I’m used to quite a lot when it comes to reading suspense novels, but this one falls in the category ‘nerve-wracking.’